Whether you are a professional or just a part-time hobbyist, one item you might want to consider investing in is a soldering reflow oven for your electronics work. A reflow oven is part of the process for constructing printed circuit boards (PCBs). However, there are several factors you need to consider before purchasing an oven.

What is a reflow oven?

A reflow oven is just like a convection oven that you might have in your home. It has four stages of heating: preheat, soak, reflow, and cooling. The oven heats and cools soldering paste at the appropriate temperature range on a PCB. This is done to hold components in place on the board. Each oven has their own heating profile and different performance ranges.

Items to Consider When Purchasing a Reflow Oven

The other option to consider is oven size. Again, cost plays a role here. If you are going to be working on multiple boards at a time, a larger oven might be better. Then again, if this is simply a hobby for you, then a smaller sized oven will work perfectly fine. In the end, it all really just depends on what you are intending to do with your circuit boards. Higher-end, larger ovens are going to turn out a better quality product, but smaller ovens that can really only do one thermal profile can be just as efficient when used correctly.

The T962 Reflow Oven is an infrared unit capable of outputting 800 Watts of power. It has a surface area of 180 by 235 millimeter. The T962 has temperature ranges from 100 to 350 degrees Celsius. It also has a cycle time of one to eight minutes. In addition, it can solder single and double circuit boards in various encapsulation forms.

The T962 comes with eight pre-programmed thermal profiles that should fit a variety of PCB designs. It has a LCD screen that is easy to use and a built-in keypad. It circulates the heat and air quickly and efficiently for an even temperature. The T962 also has a single door with a window that holds the PCB board in place. An individual can use the window to observe the soldering process. One other nice feature is that this unit has a built-in exhaust fan for soldering.

While this was a relatively popular model for the features that were provided, there were a few notable complaints. One complaint related to the ineffectiveness of the LCD screen and how half of it was not usable. The other related to a hot spot within the unit using the third wave function. It ended up burning the PCB. 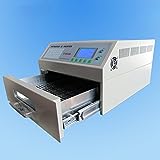 This is another SMTHouse product that is similar to the T962. The T962A is an infrared unit that is capable of outputting 1500 Watts of power. It has a temperature range of 100 to 350 degrees Celsius. In addition, it has a cycle time of one to eight minutes. It can also manage PCBs that are single and double soldered. The T962A also has an LCD screen for programming and ease of use.

The biggest advantage this unit has over the T962 is that it has more surface area. It has a soldering area of 300 by 320 millimeters. Depending on the board size, it can do more than one at a time. It also has eight pre-programmed thermal profiles just like the T962. As with the other model, the T962A produces an even heat flow for accurate temperature cycles for a variety of PCB sizes.

This product was slightly more popular that the T962 and did not have any overly negative reviews. However, we did note that one professional complained that this unit did not handle larger boards as well as it claimed.

The MC-301 is extremely user friendly. It uses an Android operating system that utilizes a touchscreen and wireless networking. Users can transfer data back and forth to the unit. It is programmable with the exact specifications of different solder pastes to get the most precise thermal profile. It has a surface area of 250 by 200 millimeters for soldering.

This unit is ideal for getting high quality products. The fact that it can be programmed using the exact manufacturer specifications for each solder paste is a major plus. It has a built-in circulation fan to maintain optimum heating and cooling throughout the thermal profile. It also removes fumes very well. As with other units, the drawer also has a viewing window. Another major plus of this model is the Wi-Fi functionality that allows users to pass data back and forth to the unit.

There were no negative comments of note. 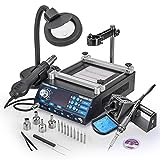 We have talked about X-TRONIC products before and they are definitely on the higher end of quality. This particular kit is an all-in-one unit that includes a heat gun, a soldering iron, magnifying glass for detailed work, and a reflow oven. It has a power consumption of 1270 Watts and the reflow oven is capable of outputting up to 700 Watts in power. The unit comes with a one year 100 percent replaceable fix guarantee for all parts.

This unit is extremely programmable and has a colored LCD display with easy-to-use push buttons. The reflow station can hold a circuit board up to 6.5 inches wide and can heat from 50 to 400 degrees Celsius. The overall reflow oven surface area is 4.75 by 4.75 inches. The 5040-XR3 kit comes with pretty much anything you would need to do a complete soldering job. An added bonus is the warranty on this unit.

One negative of this unit is that it is not a complete reflow oven. It only really handles the pre-heating cycle of the thermal profile. If you are looking for an overall complete kit, this is not it. However, it is close. Most reviews of this unit were positive and the only negatives related mostly to power output not being at the high range as expected.

The ChefStore is capable of outputting power of 2900 Watts. It is an infrared unit that has a 400 by 600 millimeter surface area. It can handle PCBs throughout an entire thermal profile. It can output temperatures from 100 to 350 degrees Celsius. It also has a cycle time of one to eight minutes. As with other units, the ChefStore also has an LCD screen for programming and is user friendly.

The largest pro for this model is that it has a larger surface area and can handle larger or multiple boards at the same time. It is meant more for larger batch production of PCBs. It has an extremely accurate thermal profile cycle and circulates the air for even cooling. It is very similar to other units for temperature range and for overall quality.

This unit received mostly positive reviews. However, a few users noted it struggled with power output and even blew a fuse after a few uses.

The AS-5001 reflow oven has a surface area of 180 by 120 millimeters and is meant for smaller circuit boards. It can handle 110 to 220 voltage inputs so it can work in a variety of environments. This unit is also an infrared model. This model is more programmable than other units are and has an LCD that allows for easy use. In addition, it has built-in safety functionality.

The major plus of this unit is that it is programmable. It can be adjusted and set to the correct parameters depending on the soldering paste. Other models only have pre-programmed cycles. It has a heat-up time of zero to five minutes. Another bonus of this model is the built-in safety features. It automatically shuts down for any issues or faults and outputs that to the user.

The size is definitely a negative as this is only intended for small batch projects. In addition, it is intended for lead-free solder and will not work well with lead-based. For the most part, this unit has relatively positive reviews and nothing majorly negative about it. 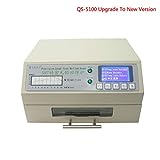 The QS-5100 is another model intended only for lead-free soldering. It utilizes infrared heating to work through an entire thermal profile. It has a precise controlled microcomputer that ensures an even heating and cooling cycle and outputs a quality PCB. The soldering surface area on this unit is 180 by 120 millimeters.

This is another smaller unit for smaller PCBs. It has a programmable LCD display and an even thermal profile. It is capable of working off 110 or 220 volts. Users found it outputted mostly consistent heat as described and that the size was ideal for smaller board designs.

This unit has mostly positive reviews and only a few minor notes. Users did find that they had to play with the temperature settings a bit to get a good product. It seemed to be off by about ten degrees, but that was easily fixed in programming. In addition, users recommended using this in a well-ventilated area due to a slight smell.

The AS-5060 reflow oven is capable of heating to a temperature of 300 degree Celsius. It has a soldering surface area of 305 by 320 millimeters, which makes it one of our larger units. It also has a shorter cycle than other models and runs from zero to thirty seconds.

The AS-5060 is capable of handling larger PCBs and batch production. It has an LCD screen for thermal profile programming. It is also easy to use and comes in a variety of languages for users. Another nice feature is that this unit comes with a one-year warranty for parts replacement. The nicest feature of this unit is that it has the shortest heating cycle of all the units.

There were no negative reviews of note for this unit. Overall, it is a good unit for larger batches and circuit boards. Being programmable is also a huge plus.

If you are an electronics hobbyist or even a professional, a reflow oven is a nice piece of equipment to have for circuit board soldering. They are similar to a convection oven and got through a four temperature thermal cycle that allows for heating, soaking, reflowing, and cooling. It is good to consider what you overall usage is going to be with your reflow oven because they come in a variety of sizes and power outputs. Some can only handle smaller boards, while others can do larger boards or batches of PCBs. If you are looking for something to use in a more professional capacity, it is probably best to consider a large unit that can handle more boards at a time. In addition, some of the units are programmable and can be inputted with specific solder paste parameters. Others come pre-programmed with a set amount of profiles and might be better suited for hobbyists. Another factor to consider is the thermal profile cycle speed. On average, most of the units take from zero to eight minutes depending on the thermal profile. Some other units are capable of cycling through at a much faster rate. As always, we recommend reading online reviews and getting a sense of what users have to say about any reflow oven you might be considering.

Best Solder to Use for ElectronicsBest Battery Powered Soldering Iron