In terms of manufacturing and metalwork, one of the best-known tools is a soldering gun. Different from a soldering iron in that it is shaped like a pistol, whereas a soldering iron is wand-shaped. Both are used for joining metal, but a soldering gun can offer a little more heat and stability and so it is the tool of choice for many people who work with metal. A soldering gun is pistol-shaped, as discussed, and is electrically powered with a trigger switch for easy one-handed control.

The Weller D650 Industrial Soldering Gun is a perfect choice for home or work use due to its high heat range and compact size. It can be easily gripped by one hand and features fingertip heat adjustment, making it easy to switch between heat settings without switching hands or moving the soldering gun too much.

The housing is completely heat-resistant, making the gun itself safer and gloves a little more optional. Even so, all relevant safety precautions should be followed at all times and units should be monitored for malfunctions and regularly cleaned as needed.

Weller as a Company

Long understood to be a dependable manufacturing company for tools and other home and industrial repair items, Weller has been around since 1941 when a radio repairman thought there had to be a better, faster way to heat up his soldering gun than waiting around while valuable work went to other repairmen.

While the technology and techniques for soldering had been around for thousands of years, the quick, convenient heat-up time and one-handed control of Weller’s soldering guns revolutionized the entire process. Utilizing classic German engineering, Weller is a giant in the soldering industry and is sure to last for several years to come.

What’s the Difference Between Industrial and Non-Industrial Soldering Guns? 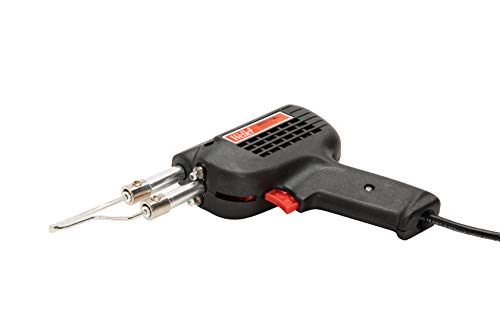 Prices pulled from the Amazon Product Advertising API on:

Product prices and availability are accurate as of the date/time indicated and are subject to change. Any price and availability information displayed on [relevant Amazon Site(s), as applicable] at the time of purchase will apply to the purchase of this product.

The fact that the Weller D650 Industrial Soldering Gun plugs into the wall does not mean that it will last an indefinite amount of time while plugged in. However, the D650’s power is steady enough that it can remain plugged in for a while without shorting out or losing heat. The fast heat-up time means that this is an excellent choice in soldering guns for both urgent and long-term projects.

The D650 is big enough to tackle large and extended jobs but small enough for fine, detailed work that could otherwise be ruined by large and clumsy soldering guns. This versatility eliminates the need for other soldering guns and buy default makes any workspace much more clean and organized.

Case and Other Accessories

While it depends on where the soldering gun is bought and which version is selected, the D650 comes with a carrying case, extra tips, and even a complete kit for added project potential.

With a simple trigger and finger heat controls, this soldering gun does not require high levels of expertise or experience to use. Caution should always be considered when working with heat or other potentially dangerous forces but with the heat resistant shell and easy-to-press trigger, this model of soldering gun is a good choice for the soldering newbie and the experienced user alike.

The tip of this soldering gun can be changed out but it does not have to be. As it is electrically powered, the D650 also does not require batteries that would have to be monitored and changed out. As long as dust and other particles are kept away from the openings such as where the cord meets the shell, there should not be any major issue with part replacement.

With repeated use, the switch that this soldering gun features as an item that makes it superior to soldering irons can become weakened and snap off as it is made of plastic, not metal or fiberglass like some triggers. This can be incredibly frustrating, especially if it happens without warning in the middle of the project.

Over time the D650’s internal joints and connections can become loose. This is especially likely to happen with heavy use, and while some of these joints can be re-tightened by removing the shell, not all of them can be fixed with simple home tools. Luckily, the D650 comes with a seven-year warranty.

Some units have been shown to have issues with repeated heat up, such as multiple uses throughout a day or repeated daily use. Some units even would not heat up whatsoever after just a few uses and without a warranty or at least proof of one, there is not much the consumer can do if and when their soldering gun breaks.

Issues with the Internal Light

Casing Must be Tight

For the unit to heat up, the screws holding the casing together have to be extremely tight to compress the internal processes. Even though the casing is heat resistant, heat can still be felt through it and even cause discomfort and a small amount of pain. It is not written in the instructions that the casing may need to be tightened, either, making it difficult for consumers to discern the problem.

No home improvement tool is perfect. Even the most well-balanced hammer can give off sparks and soldering guns are even more complex. Weller has been around for a long time as a manufacturer and seller of tools and machines and while there have been a few duds, the same can be said of any model of soldering gun from any manufacturer.

A quick glance at reviews on the internet shows a fairly balanced insistence on both good and bad, but Weller’s D650 is slanted strongly towards the positive. Even with the potential defects, the likelihood of receiving a functional model with perfect heat-up time and a durable, heat-masking shell increases over time as the design is reassessed and perfected.

PCB Tool Expert
So, should you buy the Weller D650 Industrial Soldering Gun?

The short answer is yes, it is a reliable purchase and a good value for the money. Most retailers have a return policy, so if you try it out within the return timeframe you may not have to even bother with the potentially confusing landscape of manufacturer warranties. This model is a good choice for the experienced, the nervous, and even the complete newbie to soldering and soldering guns.